Discover the invisible world of cannabis’ molecular structure, and the complex chemical interactions that give weed its unique recreational qualities.

These days, if you want to buy cannabis extracts, the range of products such as HTFSE (high terpene full spectrum extract), shatter, distillates and terp sauce Canada has on the market is considerable.

You can buy online from a large number of eCommerce outlets, or visit a bricks-and-mortar shop in pretty much every city or large town across the country.

But what, exactly, is in cannabis and cannabis extracts that provide so many enjoyable reactions and health benefits? There is currently a large amount of science-based research being done into the chemical and physical characteristics of cannabis, and it is uncovering some fascinating and exciting things.

Let’s take a look at marijuana on a molecular level and find out about some of them.  This won’t be like a High School chemistry class. I’ll keep it simple and relaxing and, best of all, there won’t be a test at the end!

The active ingredient in cannabis, Δ⁹-tetrahydrocannabinol (pronounced “delta nine tetra-hydro-canna-binol”), or THC for short, was first isolated in Israel in 1964, by the Bulgarian-born organic chemist Rapheal Mechoulan.

Mechoulan and his team of researchers discovered that when its temperature is raised (by being smoked or heated via a hot surface)  tetrahydrocannabinol is absorbed into the bloodstream via the tiny capillaries in the lungs.

The cerebral cortex plays a key role in memory, consciousness, attention, perception, thought, memory and language. THC acts as an inhibitor to the functioning of the cerebral cortex, inducing relaxation, sleepiness, reduced blood pressure and a disruption in attention.

These factors all contribute to create the pleasant, relaxed and dreamy sensations experienced by being high.

THC acts on the cerebellum by blocking some of the neural pathways associated with fine motor skills: another reason why cannabis and its extracts produce that nice, mellow feeling of relaxation.

Its functions include control of eye movements, balance and voluntary motor movement, all of which are affected by TCH, and which all contribute to that dreamy, “heavy” feeling cannabis users experience.

Cannabinoids are concentrated in an extremely viscous resin produced in the trichomes of the cannabis plant. When viewed with a microscope, these tiny, elongated glands look a little like the protruding tentacles of a sea anemone.

The cannabinoids produced by the cannabis plant have evolved to give the plant a number of benefits including humidity control, water conservation, and repelling pests.

At least 113 separate cannabinoids acids have been isolated from the cannabis plant, and ongoing research continues to discover more.

When heated up, cannabinoid acids undergo a process called decarboxylation. This converts them into the compounds that produce the various euphoric effects that cannabis users know and love.

Delta-9-tetrahydrocannabinol (THC), for instance, the main psychoactive component of cannabis, does not contain naturally high (pun intended) quantities of THC. Its natural form is part of a more complex compound called tetrahydrocannabinolic acid, or THCA.

From THCA to THC 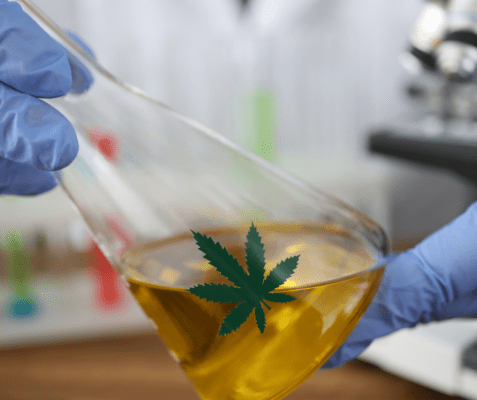 THCA is found naturally in raw cannabis leaves and is, in itself, non-intoxicating. Over time, however, THCA will decay into THC via the aforementioned decarboxylation process.

Essentially (we needn’t go into the chemical process too deeply), decarboxylation removes one of the carbon atoms, and one of the oxygen atoms from the THCA molecule, leaving behind the highly psychoactive THC component.

As weed dries out in the traditional manner, the THCA component naturally converts into the THC that smokers of bud go after. When it is burned, the THC vaporizes and is inhaled with the smoke of the burning cannabis plant matter.

However, scientists have discovered that the decarboxylation process can also be sped up using a variety of laboratory-based techniques. When heated to a temperature of 110°C, decarboxylation occurs in between 30 and 45 minutes.

When consumed orally, THC-containing products are broken down by the liver into an even more potent psychoactive substance known as 11-hydroxy-THC. This has a slower onset of effects but produces a much more sustained and even high.

A Boom for Scientists

The current interest in, and demand for, cannabis and cannabis extracts has also resulted in an upsurge in research into the active compounds present in cannabis and their many applications for health and wellbeing.

Writing in the health research forum STAT, Andrea Holmes PHD, a professor of chemistry at Doane University in Nebraska, states that:

“We’ve only begun to scratch the surface of clinical research for the medical and health applications of cannabis. This exploration didn’t happen without collaboration between organic chemists, biologists, botanists, agronomy experts, medical doctors, pharmacologists, and experts in clinical trials, drug formulation, and therapeutic product design.”

Whether you are in the market for some simple weed, or a more complex compound such as shatter or terp sauce, Canada will have a MoM dispensary or a bricks-and-mortar store that can supply you with the best gear and the best advice.

The staff at Matrix Extracts, for instance, are passionate about keeping abreast of the latest research and developments into cannabis, its many and varied extracts and derivatives, and the health benefits that can accrue from them. Feel free to ask them in-depth questions about the science of cannabis.

All views expressed here are from a third-party source and do not necessarily represent the entity of Matrix Extracts itself. This blog post is intended to be used for informational purposes only.