Discover the origins of the word “marijuana” and delve into the many nicknames and monikers for weed.

If you’re looking for pure weed, or some sort of cannabis extract such as CBD oil, terp sauce or bulk shatter, Canada is the place to be. These days, there is an almost unlimited number of different cannabis-related products on the market in the Great White North.

But with the bewildering array of brand names, product descriptions, paraphernalia, slang and acronyms that are associated with marijuana, if you’re new to the world of extracts, Canada’s weed industry can be a bit daunting.

Let’s just take things down a little, and delve into the origin of the word marijuana and some of the slang names given to cannabis.

The origin of the word “marijuana” is hotly contested among etymologists: people who study the roots of language and words. While it may be comical to imagine a bunch of etymologists sitting around a campfire smoking up big time and debating the source of the name, the study of words such as marijuana is actually an extremely serious business. 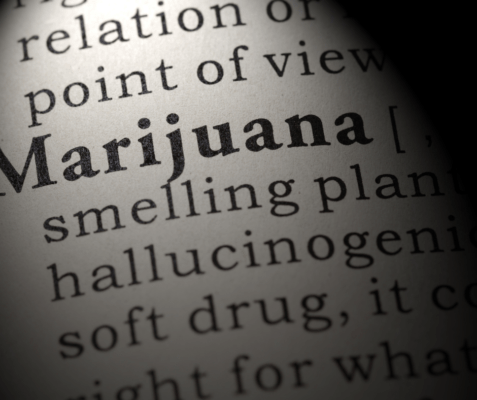 There is no doubt that the word marijuana sounds like it is Spanish. It rolls off the tongue as easily as tequila, hacienda and Ay Karumba.

According to the Oxford English Dictionary, the font of all knowledge when it comes to words, the term may have originated as a corruption of mallihuan, a word from the Aztec language meaning “prisoner.”

Cunning linguists, however, have pointed out that there is no basis for connecting mallihuan with marijuana, and that the similarity is just a case of “accidental homophony”: that is to say, the words just sound similar.

It came from the East…not from the West

Botanists now get into the marijuana name game. According to them, cannabis was not native to South America anyway, so the notion that the word has its roots in the indigenous Aztec language is not possible.

Etymologists have taken this as a suggestion pointing towards the origins of the word being a Chinese phrase, ren hua, meaning literally “hemp seed flower.”

The smoking of weed entered mainstream US consciousness during the Great Depression. Immigrants from Mexico had brought cannabis culture to the United States in the late 1800s, but it wasn’t until 1910 that the word marijuana began to be used. Prior to that, cannabis was the most commonly used moniker for what people also referred to as “locoweed.”.

In 1930, Harry Anslinger, the director of the newly-established Federal Bureau of Narcotics, launched an attack on cannabis that would last for the entire thirty years of his tenure with the bureau.

A violently racist, anti-Semitic wackjob, Anslinger’s use of the word marijuana was usually in conjunction with hysterical denunciations of jazz music and what he referred to as “the degenerate races.”

To promote his rabid theories, and to help denounce marijuana use, Anslinger took advantage of a new medium that was rapidly gaining popularity in America: cinema.

The Smoke of Hell

Anslinger and his cronies commissioned movies denigrating cannabis and vilifying the sections of society that used it. The poster for the 1942 film The Devils Harvest describes marijuana as “a vicious racket with its arms around your children.”  Phew…calm down Harry!

But regardless of Anslinger’s efforts, marijuana had entered mainstream society on every level. And as the use of cannabis spread across the globe, so, too, did the slang used to describe it.

OK…first off. That’s a fictional book title I just made up. You won’t find it on Amazon. But there’s a whole encyclopedia (or is it dictionary?) of weed-related slang out there. Here’s a very small selection.

If you’ve ever seen your friends start giggling and nudging each other when they see the numbers 420, then you’ve encountered a classic piece of American marijuana slang.

The story of how this particular term came about is pretty well known, but for those that don’t know, it stems from a group of 5 students attending a school in San Rafael, California, in the early 1970s. The boys would meet every day at 4:20 PM to go off and search for a supposed abandoned crop of cannabis that they had a map for.

Eventually, they gave up the search, but continued to meet at 4:20 to smoke weed. One of the boys – who called themselves The Waldos, because they met outside the school walls – went on to become a roadie for the Grateful Dead, who happily spread the use of the term via their horde of loyal “Dead Head” followers.

The Brits love their weed. And even though it’s a difficult plant to grow outdoors in the British Isles, ganga grown indoors widely available. If you’ve seen the movies Lock, Stock and Two Smoking Barrels or The Gentlemen you’ll have some idea of this.

Many of the British slang words for weed – and smoking paraphernalia – have their origin in Cockney Rhyming Slang. For example, if someone asks “has anyone got any Veras?” they are referring to cigarette papers, as in “Vera Lynns” = skins = cigarette papers.

Other popular words for marijuana in Britain are Skunk, Peng, Zoot and, of course Ganga. A person who smokes an excessive amount of weed is referred to as a “teahead.”

The Antipodes are a hotbed of cannabis culture. And as you’d expect from the laid-back and cruisy Australasians, coming up with inventive names for weed are national pastimes for Kiwis and Aussies! Here are a few examples:

Weed grows easily in New Zealand, especially in the tropical northernmost areas of the country, where it can often be found growing alongside puha.

So after a sesh on the choof (weed) you might have the munchies and head out on a Maccas Mish (ie a trip to a fast food outlet)!

For a country that gave the world Timmies, poutine, toques and Wayne Gretzki, Canada has very little in the way of cannabis slang. A Google search only turns up one native slang word about [sic] weed and that word is Errl as in “Errl, boom me one.” Perhaps you might like to send in your slang word contributions.

When it comes to marijuana, terp sauce, distillate syringes, cannabis diamonds or bulk shatter, Canada has a plentiful supply of online stores that can hook you up with whatever you need.

And whatever you want to call it, the crew and Matrix Extracts, Canada’s leading supplier of all things weed-related, will know what you are talking about.

* * All views expressed here are from a third-party source and do not necessarily represent the entity of Matrix Extracts itself. This blog post is intended to be used for informational purposes only