Take a look at the history and use of the cannabis concentrate product called Shatter.

Since cannabis was legalized in 2018, the number and variety of pure cannabis extracts Canada’s producers can supply has grown exponentially.

Alongside the technological advances in the production and refinement of cannabis extracts, there has been a large growth in demand for both traditional cannabis products and the more highly refined cannabis concentrates.

One of the most sought-after cannabis extract products on the market today is one known as Shatter. So let’s take a look at the origins and uses of this intriguing new cannabis product.

If it Doesn’t Shatter, It Doesn’t Matter 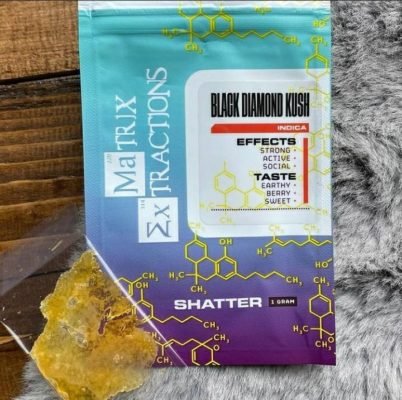 Shatter is a relatively recent addition to the cannabis user’s portfolio of choices. It emerged on the market in Canada in the early 1990s as just one of many products that resulted from a revolution in high-tech extraction techniques.

A Thousand and One Uses

But the roots of shatter production, and, indeed, all cannabis extracts, can be traced all the way back to the age-old practice of making hashish.

Although cannabis had been used medicinally for thousands of years, hashish didn’t make an appearance until around 900 AD. Hashish appears in a story from The 1001 Arabian Nights, and, according to legend, it was used in the Middle Ages by assassins to subdue their victims before they killed them.

Hashish was, and largely still is, made by compressing the sticky resins found on fresh, female cannabis flowers.

By the early 1800s, hashish had made its way to Europe, and by mid-century was being used by pharmacists for treating numerous illnesses and conditions.

The oral medicines containing cannabis and hash extracts that lined the shelves of US pharmacies were manufactured using various primitive vaporization methods.

During WW2, cannabis and hashish oils were being used to “soften up” captured spies before they were interrogated. After the war, the methods adopted for refining these products began to attract some serious scientific attention.

In a book written by D. Gold in 1973, called Cannabis Alchemy: The Art of Modern Hash Making, a brief overview was given for the preparation of cannabis oil.

The method involved using pure alcohol, solvents and activated charcoal, and an evaporation procedure which resulted in translucent amber oil.

From Hash to Smash

A Canadian cannabis maker known as BudderKing was one of the first producers to market shatter. His first, experimental products were initially sold through a small, select group of dispensaries in the early 2000s.

By the mid-2000s, however, the techniques involved with producing shatter had been made available to the general cannabis-using public, and Shatter had emerged as one of the staple methods for people to consume cannabis.

Shatter looks like thin, yellow glass. It is very brittle and tends to break up – or shatter, hence the name – just like glass if it has been manufactured correctly. Sometimes it does get soft and will not completely snap, this is common and can happen when the terpene content is greater and results in more flavour.

Properly cured shatter is one of the cannabis concentrates favored by dabbing enthusiasts.

All shatter appears to have the same consistency at first inspection. But the physical texture of different shatter products can vary according to the type of plant that the shatter was concentrated from, and the process used to make it.

Shatter with a higher THC concentration is soft, with an oily, toffee-like feel.

Shatter products that contain higher levels of THCA, on the other hand, are more likely to be brittle, with a glass-like feel. At room temperature, shatter containing a high level of THCA is very fragile and easy to break. 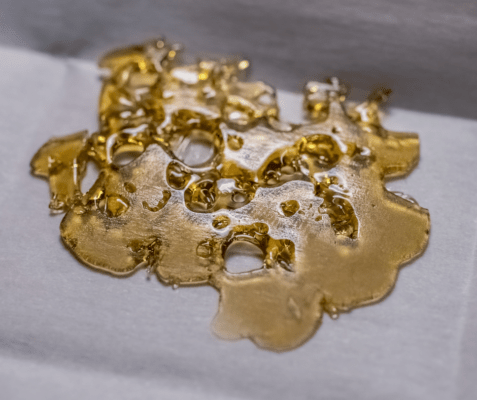 For some users, Shatter with high levels of THC aren’t quite what they are looking for due to its rapid and potent high. So consumers who want the potential medicinal, and therapeutic benefits of cannabis without its intoxicating effects, may choose a variety of shatter that is high in CBD and low in THC.

A Dab of Shatter

The most popular and effective way to smoke shatter is by dabbing. This method requires a “dab rig”, which is a specialized device with a glass “banger” attached to a water pipe, and a metal nail that is heated to melt the shatter.

Shatter requires a source of intense heat in order to make it vaporize. Some users employ a handheld blowtorch (similar to the ones that chefs use to melt the sugar on top of creme brulee).

You can also use electric nails, also known as E-nails, which eliminate the need for an open flame, and cut down the risk of burns or even fire.

Breathe In and Breathe Out

A common mistake made by dabbers when smoking shatter for the first time is to take a big hit and hold the smoke in their lungs: the same way they would if they were smoking a joint, or inhaling from a bong.

However, this isn’t necessary for shatter dab hits. In fact, inhaling smoke and holding it like this will cause lung irritation and coughing.

The best method for inhaling shatter is to exhale before taking a hit, then inhale the smoke rapidly and blow it straight back out again. These smaller inhalations work better than long, hard drags, especially if the dabber is prone to coughing.

Because Shatter is a concentrate, inhaling it doesn’t involve breathing in the smoke from combusted plant material. For this reason, the high generated by cannabis shatter is described by users as much cleaner than other inhaled methods of consuming cannabis.

It also provides a much more consistent high, and many cannabis aficionados have switched to laboratory-manufactured concentrates, such as shatter, for their daily doses.

Use It or Lose It

For users wanting to ingest large amounts of THC, shatter provides very high concentrations of both THC and other cannabinoids. This can, however, have its drawbacks…pardon the pun!

While a particularly potent strain of plain cannabis may have THC levels that sit around 25% to 30%, the THC content of shatter can be up to a staggering (literally) 80%.

This will produce an intense high very quickly, and a single hit of high-THC shatter can be more powerful than smoking an entire joint!

The downside of this, of course, is that the quick and concentrated high produced by smoking shatter can create intoxication, dry mouth, couch-lock, and a feeling of intense heaviness.

Too Much of a Good Thing

Pure cannabis shatter needs to be treated with respect, due to the high levels of THC it contains. A THC overdose, while not fatal, will be extremely unpleasant. It can result in an elevated heart rate, feelings of anxiety and disorientation, shortness of breath, nausea, and paranoia.

Ingesting solvents or contaminants contained in any cannabis concentrate is dangerous, especially in patients who are using shatter for medicinal purposes.

Because shatter is extremely pure, and is produced under extremely stringent laboratory conditions, users will want to ensure that their concentrate stays clean and free of debris.

This is especially important for medicinal users of shatter because they don’t want to medicate themselves with a product that has been contaminated.

In order to keep shatter concentrates as clean and pure as possible, it needs to be handled with gloves and kept wrapped in parchment paper.

Shatter should always be placed on non-stick surfaces (such as glass) so that the sticky residue is not wasted.

Shatter can be stored in an airtight glass container, with parchment paper between each separate sheet to prevent them from sticking together, and from sticking to the glass.

Shatter can also be stored in a freezer. However, condensation can be a problem with this, as the moisture associated with freezing and thawing will cause the shatter to break down more rapidly.

Your shatter supplier will be able to supply you with storage containers to keep your shatter in mint condition.

Try Shatter for Yourself

Matrix Extracts has a large selection of shatter products and the gear you’ll need to get the most out of it. Check out their range by clicking here.