The contents of your distillate syringe, or your container of bulk shatter, may not look very arty. But the cannabis plants that they are derived from, along with numerous other psychoactive substances, have played a large part in the world of religion and the arts.

From the dawn of human civilization, spiritualists, shaman, religious leaders and artists have used various drugs to both enhance their creativity and to explore the outer edges of human life and consciousness.

You could write a book – or even a thesis – on the role that drugs have played in human religions and in human creativity. But we don’t have the time for that…we have music to listen to, art to appreciate, Gods to appease and books to read.

So instead, let’s take a brief look at some of the ways that drugs have influenced the religious and creative spirit of humans down through the centuries.

Psychoactive substances have been used for religious purposes since prehistoric times. Stone sculptures found in Central America, and dating from around 1,500 BCE, portray magic mushrooms sprouting dragons and the heads of gods.

The Scythians, a tribe that lived in the Altai Mountains of Central Asia, burned cannabis in censers (metal or pottery vessels for the burning of offerings) during their religious ceremonies from the 5th to the 2nd centuries BCE.

The ancient Greeks were lovers of wine (it’s also a drug, after all) and used it extensively in their religious ceremonies. But there is also evidence that some of their more elaborate and solemn ceremonies included the use of hallucinogenic substances such as opium.

Many Mediterranean civilizations, including the Greeks, made use of the mind-altering properties of the Amanita muscaria mushrooms, sometimes via a concoction made from urine!

The consumption of kava, a drink composed of the chewed leaves of the kava tree (Piper methysticum), has a long history in the Pacific Islands. Kava produces a slight numbing of the mouth and a feeling of relaxation and well-being.

For centuries before its use was documented by Europeans, kava played a large part in the religious practices on the islands of Vanuatu. Kava was drunk at initiations, to celebrate victories in battle, in thanks-giving ceremonies for bountiful harvests, at their “land diving” festivals (did you know that Vanuantans invented bungy-jumping?), and at spiritual gatherings to propitiate the gods who live in the islands’ many volcanoes.

On a more sinister note, kava was also used to stupefy the victims of cannibalism, and to embolden the religious leaders whose job it was to kill them. In fact, the world’s last recorded instance of cannibalism took place on an isolated Vanuatuan island in 1956…not all that long ago!

In Vanuatu these days, however, kava is mainly a social beverage. Kava nakamals are the equivalent of the Western pubs or bars: places that workers visit after work. Patrons sit in circles and clap as each person drinks their cup of kava.

We can confirm that kava is slightly bitter and tastes vaguely like dirt. It’s not exactly pleasant, but when consumed at sunset, in a tin shed on a Pacific Island, in the company of big, friendly Melanesians, the experience is quite unique and (almost) spiritual.

Drugs in the New World

The Mayans of Central America were great users of mushrooms. Sculpted images in the form of ‘shrooms adorn the Guatemalan temples of the Mayans, and Christopher Columbus reported the use of mushroom snuff by Mayan priests.

During the coronation of the Aztec emperor Montezuma in 1502, the use of psychotropic mushrooms were part of the ceremony. Five centuries later, during the 1950s, a group of archaeologists were the first Europeans to be invited to consume the sacred fungi at a Mexican ceremony. The resulting publicity led to an influx of tourists seeking the same mushroom experiences.

By the way…the title “Black Sabbath at 78 Speed” we used above, is a reference to a Cheech and Chong gag. Mr Chong is describing how he took some acid and played a Black Sabbath record on high speed (78 RPM was the original top speed of record players). “And then what happened?,” asks Cheech. Mr Chong replies that he “…saw God.”

The Colour and the Shape 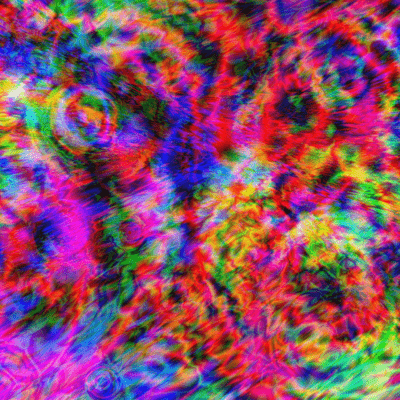 The use of drugs to facilitate artistic creativity, especially in the creation of religious imagery, has a long history. There is archeological evidence of psychoactive substances being used by the painters of rock art pictures as long ago as 10,000 years, and historical evidence of the use of drugs by artists for at least the last 5,000 years.

The writing on the walls

The earliest artistic expressions of humans can be found in cave paintings. The surreal and abstract nature of cave art, such as those found in the Lubang Jeriji Saléh caves on the Indonesian island of Borneo, suggests that some form of intoxicants may have been used by the artists who painted them.

Archeologists have theorized that ancient cave art may have been part of shamanistic traditions that involved music, drumming, dancing, and drug-taking of some kind.

Although there is little evidence to back up these theories, some anthropologists and ethnographers interpret the non-figurative marks found in cave art – spirals, dots, spheres and lines – to be the result of altered states of perception being experienced by the artists.

The drug opium (the narcotic resin of the poppy flower) has played a sometimes pivotal role in later artistic endeavours. The artists of the Romantic Movement, popular in the 18th and 19th centuries, utilized the dreamy, Eastern-flavoured effects of opium (which was legal at the time) in their celebrations of natural landscapes, the human form, and the imagination.

Paintings such as John Martin’s Belshazzar’s Feast (1820), depict complex, atmospheric, dream-like scenes (in this case a cavernous banqueting hall lit by the moon and swirling clouds, and containing a bunch of biblical references), that invoke images of the Orient and the mysteries of the East.

Beginning in the 1940s, hallucinogenic drugs such as LSD were used by many artists (along with composers, poets, writers and musicians) in order to elevate their perception of the world and to push back the boundaries of creativity.

Artists such as Henri Matisse began exploring the concepts of intense colours and shapes that flattened and emphasized perspective. The imagery of fractals (ever-decreasing geometric shapes) was a popular result of LSD-influenced art during the sixties and seventies.

This was especially true in the realms of music (which we’ll cover in another article) where cover art, graphics, posters and comics all intertwined in a seductive mix of drug-induced exuberance.

Create Time to Get Creative

The type and number of cannabis extracts Canada has on the market these days is mind-blowing. So if you need something to help you tap into your artistic or spiritual side, the crew at Matrix Extracts can help. In these somewhat anxious times, it’s good to make time to relax, unwind and either get creative yourself or enjoy the creativity of others.

From distillate syringes and HTFSE (high terpene full spectrum extracts) to the best bud varietals on the planet, if you want to see a God, write a symphony, paint a masterpiece, or just chill out to some groovy music, Matrix Extracts can give you the best advise and supply you with the best gear. Happy creating!

All views expressed here are from a third-party source and do not necessarily represent the entity of Matrix Extracts itself. This blog post is intended to be used for informational purposes only.